Your creative path to self healing: adult mandala coloring pages and meditation music

Do you know you can heal yourself by means of your own creativity? Healing doesn`t need to be expensive, it can be easy and affordable too. Since a couple of days, I upgraded The Free Edition of the Mandala Coloring Meditation kit. It now comes with 10 new free printable adult mandala coloring pages, all introduced by `Words of Inspiration` – samples of the complete edition. 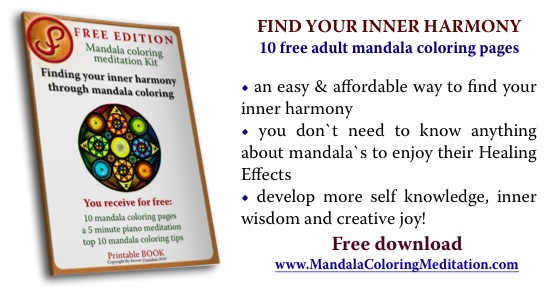 You do not only receive these 10 free mandala coloring pages, but also The Ultimate Guide for Mandala Coloring Meditation with my top 10 tips.

Besides the 10 mandala coloring pages and the Ultimate Guide, I give you my own specially composed piano meditation music – to create a relaxing and inspiring atmosphere while coloring mandalas.

May you awaken to the power of the mandala!

I wish you all the best,
Warmly,
Steven Vrancken
Helping you explore creative self healing

What is a mandala?

Almost 10 years ago, when I was studying communication sciences in Montréal, Canada, I discovered a beautiful website: The Mandala Project. It`s a great website, giving lot`s of interesting information about mandalas, education, the labyrinth project, . . . Another website I discovered there was  Starwheels, an extraordinary website from the artist Aya. Aya makes amazing mandalas, and feels for me very pure and integer.

I wrote, for the university, several papers about mandalas. Here you find a sample, a text that was inspired on  information given on the websites `The Mandala Project` & `Starwheels`.

“Mandalas” have been used in all cultures throughout history but they have been particularly developed in India’ (reference Mandala project). ‘In the Americas, Indians have created medicine wheels and sand mandalas. The Aztec calendar was both a time-keeping device and a religious expression of ancient Aztecs. In Asia, the Taoist “yin-yang” symbol represents opposition as well as interdependence. Tibetan mandalas are often very intricately painted illustrations of religious significance that are used for meditation. Both Navajo Indians and Tibetan monks create sand mandalas to demonstrate the impermanence of life in their spiritual practices. In ancient Tibet, monks created intricate mandalas with colored sand made of crushed semi-precious stones as part of a spiritual practise. The tradition continues to this day as the monks travel to different cultures to demonstrate the creation of the mandala and to educate people about the culture of Tibet’ (reference Mandala project).

But you don’t need to go to Tibet to experience a mandala! You have already encountered an infinite numbers of mandala’s in your live, you are even using them right now: your eyes! Look into the mirror; your eyes are round, so are mandala’s. But the most famous mandala’s you know are maybe the ones you see during Christmas: the star on the top of your Christmas tree, and the snow crystals on the outside of your windows.

You will notice by yourself that every mandala is always constructed around a center, a middle, an Essence. So do your eyes, which are constructed around the pupil, the essence of your eyes. Without that center, your eyes wouldn’t be of great value. ‘”Mandala”, in Sanskrit, means “that which contains the Essence”’(Reference Starwheels). ‘On our planet, living things are made of cells and each cell has a nucleus – all circles with centres. The crystals that form ice, rocks and mountains are made of atoms and each atom is a mandala. Flowers, spider webs and the rings found in tree trunks all reflect the primal mandala pattern. The “circle with a centre” pattern is the basic structure of creation that is reflected from the micro to the macro in the world as we know it’ (Reference Mandala project).We know our eyes have a primal mandala pattern and that they have an essence also: the pupil. But eyes aren’t functioning by themselves. There is a guided current of bio electricity flowing from your brains via the nerves to very small muscles, which are moving your eyeballs right now. In this way the real Essence of your eyes can never be the pupil, because the pupil doesn’t provide this bio electricity, our birth does!

Here you go, another free adult mandala coloring page. I would be happy to know if you like this one. If you haven`t downloaded the Free Mandala Coloring Book yet, click here!

You can download the mandala through Sribd, or simply by clicking on the image below. 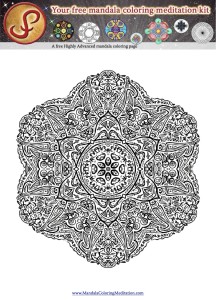 I`m happy to share with you another new highly advanced mandala coloring page. Just click on the image to download the free printable pdf file, and enjoy coloring this one! You can experiment with a lot of different colors – the basic blueprint for this mandala is a six-star, and there are a lot of small graphic details to play with. And in the center of this mandala, you can see some kind of flower, opening itself to the cosmos, to the mandala page colorer.

I would love to hear from your coloring experiences, feel free to leave a comment at the end of this blog post. 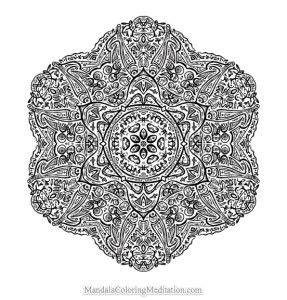 If you are one of the several hundreds of people who downloaded the 20 free printable mandala coloring pages, then you will know I planned to open new orders for the Exclusive Mandala Healing Project. I love to create personal healing mandalas! I was supposed to accept orders last Friday. But I fell sick! I`m still working on low batteries, and cannot manage to program the order-page for the personal mandala art in time. 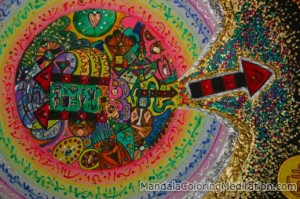 So, please bare with me! I`ll do my best to get it online as soon as possible. And when you would have signed up to receive prior notification, you`ll be among the first ones to know.

Warm regards,
All the best,